You are here: Home

Ethanol is the world's largest and fastest growing source of renewable energy with many countries having some form of biofuel industry. With its clean green image and ability to be easily blended with petrol, ethanol has been accepted by both governments and consumers.

In 2009, global ethanol production reached nearly 74 billion litres. This volume represents a growth of nearly 400 per cent since 2000.

In as many as 40 countries around the globe, governments and industries are partnering to develop and expand biofuel production to help address our climate concerns. 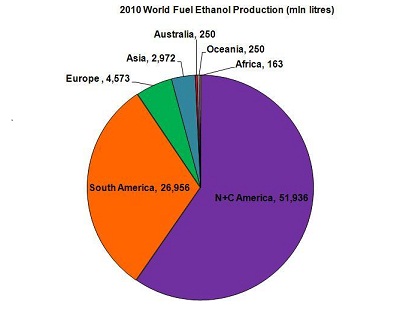 Brazil is the world's number two ethanol producer as well as the leading ethanol exporter.  Ethanol production has expanded in recent years.

Sweeden has over 795 E85 petrol stations making it the strongest in the bioethanol transport sector in Europe.

In Germany, there are over 73 bioethanol petrol stations serving blends of E50, E85 or E100.

Sweeden is by far the largest market for bioethanol as a transport fuel. Germany is progressing faster than most other European countries.  Most other countries sell E85 at only a handful of petrol stations.

In Europe the aim is to replace 10 per cent of transport fuels with renewable fuels like ethanol by 2020.

Although E85 is still in its early days in Australia, it is expected to be available at over 100 petrol stations by the end of 2011.

The demand for ethanol blended fuel has increased significantly from 2006 to 2009.  States with the largest ethanol sales include New South Wales, Queensland and Victoria.

Ethanol is gaining wider community acceptance and there is support at national and state levels for a greater role for biofuels in transport.